Wat Laksi was a royal temple. It was been in Laksi District. It was built in the Rattanakosin era. The first temple was called “Wat Luang Phor Roem” but was renamed “Wat Laksi”. The Buddha’s relics are enshrined in the pagoda inside the temple. Now, there are 53 monks in the temple. At present, Praratpipattanaporn is an abbot.

There is also a wiharn (pavilion which houses a statue of “Luang Pu Khao” A famous monk who was the 2nd chief monk. He was the longest abbot of the temple. History has it that King Rama V used to pay him a visit, and he arrived at the temple by boat along the canal. The king paid respect to Luang Pu Khao at Wat Laksi.

Now, it’s time to test your knowledge and skills of the English language. 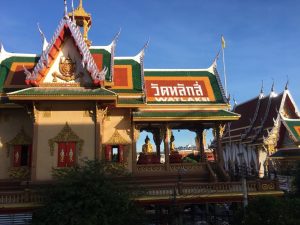 One of the landmarks in Laksi district is a man-made canal called Prem Prachakon. The canal was built over a hundred years ago, during the reign of King Rama V of the Chakri Dynasty.

The canal was commissioned by His Majesty King Chulalongkorn Rama V. He graciously pleased to summon Somdejchaopraya Borommaha Maha Suriyawong (Bunnag) to oversee the construction of the canal. The process began with the reclamation of the land. The construction director was Chao Phraya Surawong Waiwat (Woraboonnak), who was a son of Sahu Phrakhamlaam. In short, it was a royal construction project, aiming to improve the waterway transportation of the canal and river system in the Chao Praya river basin.

Phra Chonlathida (known as Captain Funk) surveyed the canal route. The committee hired a team of Chinese contractors to build this long canal. The canal connects the Chao Phraya River from Phadung Krung Kasem Canal in front of Wat Sommanat Vihara, Bangkok with KohYai Sub-district, Krung Kao District, Phra Nakhon Si Ayutthaya Province (north of Bangkok). The length of the canal is 50.846 km. We don’t know the total cost of the construction.

The canal has been useful for the Thai people. The king (Rama V) saw that the boat trip down the Chao Phraya River has several detour routes, causing a lot of time to travel.

One way to deal with the waste of energy and time is to create shorter waterways. It is also a way to drain the water during the flooding session. The canal construction began in AD 1869. It was completed in the year BE 2413. The construction took 18 months to complete. It is considered the first canal in the reign of King Rama V. When completed, there was a royal ceremony to celebrate the opening of the canal. It was a big celebration of that time with many different theaters and performances.

The construction of the canal is another piece of evidence showing the great heart of the Siamese kings toward their subjects. The Prem Prachakon canal was built in honor of His Majesty King Rama V revealing his greatness and charitable heart — providing general convenience to the Thai people to enhance their wellbeing and quality of life.

Length of the Canal

Khlong Prem Prachakon is a man-made canal. Its length is 50.846 kilometers. It is a canal connected with an existing one called Phadung Krung Kasem Canal in Dusit District, Bangkok.

If you travel by boat along the canal from Bangkok, we will pass through the following places — Dusit district, Bang Sue District, Chatuchak district, Laksi district, Don Mueang district (Bangkok), Mueang Pathumthani District, Sam Khok District (Pathumthani Province). The beginning of the canal (if you travel from the north) is the Chao Phraya River in Bang Pa-in District Phra Nakhon Si Ayutthaya, Thailand’s former Capital.

Words You Should Know 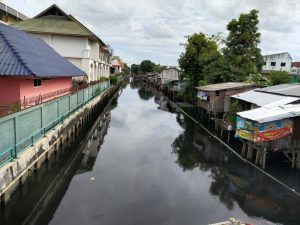